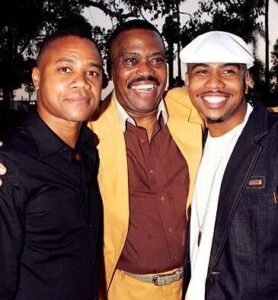 Cuba Gooding, Jr was born on January 2, 1968, in The Bronx, New York.
– He gained his breakthrough role as Tre Styles in Boyz n the Hood
– He gained acclaimed recognition in The Tuskegee Airmen and Jerry Maguire
– His first job as an entertainer performing with Lionel Richie at the closing ceremonies of the 1984 Summer Olympics in los Angeles
– In 1996, Gooding earned an Oscar for Best Supporting Actor for his role in Jerry Maguire
– Gooding has appeared in lead roles and co-starring roles in As Good as It Gets, What Dreams May Come, Men of Honor, Pearl Harbor, Rat Race, Radio, Snow Dogs, animated movie Home on the Range, Chill Factor, Boat Trip, Norbit and Daddy Day Camp.
– Gooding has appeared in many more gritty, critically ignored, direct-to-DVD movies than theatrical or television releases
– He received recognition as Ben Carson in Gifted Hands: The Ben Carson Story
– Recently, he has appeared in Television roles in The Book of Negroes, Big Time in Hollywood, FL, and the anthology series American Crime Story: the People v. O.J. Simpson
– He received a Primetime Emmy Award nomination for Outstanding Lead Actor in a Miniseries or a Movie