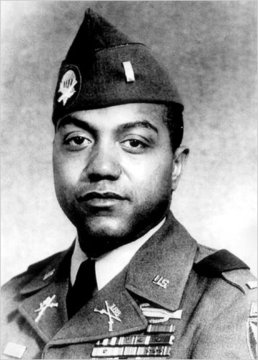 When Vernon Baker was 4 years old, his parents were killed in an automobile accident and he and two older sisters went to live with his grandparents.   A mischievous 10-year-old, Baker went to Boys Town in Omaha, where he remained for three years.   After earning his high school diploma and dabbling in odd jobs, Vernon Baker joined the Army in 1941.   He then went to Officer Candidate School, was commissioned in early 1943 as a second lieutenant, and assigned to the 92nd Infantry Division, an all-black unit.  The division’s soldiers were known as Buffalo Soldiers.   A decisive Allied victory in which Baker wiped out four German machine-gun nests on a hilltop in northern Italy and lost 17 of his men earned him the Distinguished Service Cross, the Army’s second highest award for bravery.   He received the Medal of Honor in 1997, one of six awarded after an investigation revealed that the black soldiers had been unjustly overlooked for the military’s highest honor.   Vernon Baker was the only living recipient. Baker, 90, died at home in St. Maries, Idaho, of complications from brain cancer.Vernon