Trending
You are at:Home»365 DAYS-OF-HISTORY»September 29 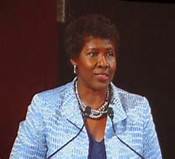 September 29, 1955 (November 14, 2016, Gwendolyn L. Ifill, journalist, television newscaster and author, was born in New York City. Ifill earned her Bachelor of Arts degree in communications from Simmons College in 1977. After graduation, Ifill worked for the Boston Herald-American, Baltimore Evening Sun, The Washington Post, The New York Times, and NBC Television. In 1999, she became moderator of the PBS television program “Washington Week in Review.” She is also a senior correspondent for the “PBS NewsHour.” Ifill published her first book, “The Breakthrough: Politics and Race in the Age of Obama,” in 2009.

In September 2011, Ifill was a presenter at the 32nd News & Documentary Emmy Awards, in August 2013, NewsHour named Ifill and and Judy Woodruff as co-anchors and co-managing editors and in February 2016, she and Woodruff, moderated the debate between Hillary Clinton and Bernie Sanders becoming the first team of women to moderate a Democratic presidential debate.