Trending
You are at:Home»365 DAYS-OF-HISTORY»September 21 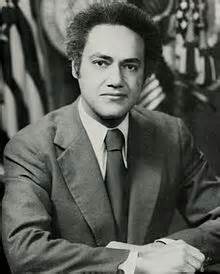 September 21, 1933 Clifford Leopold Alexander, Jr., lawyer, businessman and the first African American Secretary of the Army, was born in New York City. Alexander earned his Bachelor of Arts degree from Harvard University in 1955 and his Bachelor of Laws degree in 1958 from Yale University Law School. He served in the United States Army from 1958 to 1959, as an assistant district attorney from 1959 to 1961, and in 1963 served as a foreign affairs officer on the National Security Council staff. From 1967 to 1969, Alexander was chairman of the United States Equal Employment Opportunity Commission. Alexander returned to private law practice from 1969 to 1975. In 1977, Alexander was appointed Secretary of the Army by President Jimmy Carter and served until 1981. During his tenure, he worked on making the all-volunteer army successful and emphasized the award of contracts to minority businesses. In 1981, he formed his own consulting firm which he continues to operate. Alexander serves on the boards of directors of several corporations and is a member of the Board of Governors of the American Stock Exchange.