Trending
You are at:Home»365 DAYS-OF-HISTORY»September 14 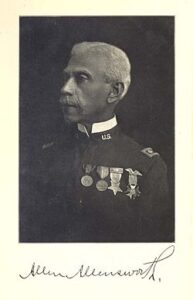 September 14, 1914 Allen Allensworth, minister, educator, and town founder, died. Allensworth was born enslaved on April 7, 1842 in Louisville, Kentucky. He escaped slavery by joining the Union Army during the Civil War. In 1871, he was ordained a Baptist minister and led several churches in Kentucky. In 1880 and 1884, he was the only black delegate from Kentucky to the Republican National Conventions. In 1886, Allensworth was appointed military chaplain to a unit of Buffalo Soldiers and by the time he retired in 1906 he had reached the rank of lieutenant colonel, the first African American to achieve that rank. After leaving military service, Allensworth moved to Los Angeles, California. In 1908, he founded the town of Allensworth in the heart of the San Joaquin Valley as an all-black community. It is the only California town founded, financed, and governed by African Americans. By 1914, the town was reported to be 900 acres of deeded land worth more than $112,500. Over the next couple of decades, the population dwindled and the town became a ghost town. Parts of the town have been preserved as the Colonel Allensworth State Historical Park. Biographies of Allensworth include “Battles and Victories of Allen Allensworth” (1914) and “Out of Darkness: The Story of Allen Allensworth” (1998).