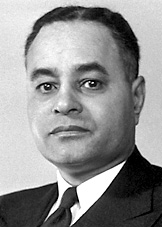 As a diplomat who accomplished the seemingly impossible by negotiating the 1949 armistice between one-year-old Israel and its Arab neighbors, Ralph Bunche demonstrated that there is more than one way to resolve an issue. For that he earned the Nobel Prize for Peace in 1950. From early in his career, he was a militant critic of American society who established himself as one of the staunchest opponents of the gradualism and conciliation urged by the NAACP. Yet, in his celebrated work for the State Department and, later, the United Nations, as a statesman and diplomat, he proved himself to be a man without color, an international civil servant of the highest rank.. For an even-tempered diplomat, he was a driven man. Orphaned at the age of 11 in thee slums of Detroit, Bunche went to UCLA on an athletic scholarship and became the first African American to earn a Ph.D. from Harvard’s government department, in 1934.. His research on the political status of African-Americans and the strategies off race-betterment organizations, used in Gunnar Myerdal’s An American Dilemma (1944),, is an indispensable classic for any student of African-American history. From 1928 until 1942, Bunche taught political science at Howard University in Washington, DC, while traveling widely to expand his research on colonial administration and race relations. He later became the first African-American desk officer at the State Department, as head of the Division of Dependent Affairs, helping to draw up the UN Charter. He joined the UN in 1947 as director of the Trusteeship Division that helped establish guidelines for territories to achieve independence. After his Middle East triumph, he directed UN peacekeeping operations in the Suez (1956), the Congo (1960) and in Cyprus (1964). In 1968 Bunche became undersecretary general, the highest rank held by an American at the UN, and until his retirement in 1971 because of illness, was UN Secretary General U’Thant’s most influential political advisor..