Trending
You are at:Home»365 DAYS-OF-HISTORY»October 7 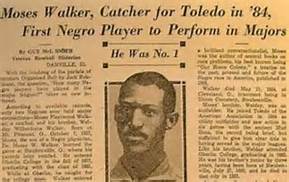 October 7, 1857 Moses Fleetwood Walker, the first African American to play major league baseball, was born in Mount Pleasant, Ohio. Walker played baseball for Oberlin College in 1881 and the University of Michigan in 1882. In 1883, Walker signed with the Toledo Blue Stockings who joined the American Association, a major league, in 1884. Walker made his major league debut on May 1, 1884 and played 42 games before suffering a season ending injury in July. The Toledo team went out of business at the end of the 1884 season and Walker played with several other teams until 1889. In 1891, Walker was attacked by a group of White men in Syracuse, New York resulting in him stabbing one of them to death. He was charged with murder but acquitted. Walker became a supporter of Black Nationalism and believed that racial integration would fail in the United States. In 1908, he published a pamphlet, “Our Home Colony: A Treatise on the Past, Present, and Future of the Negro Race in America, in which he recommended that African Americans immigrate to Africa. Walker died May 11, 1924. His life was the subject of the book “Fleet Walker’s Divided Heart,” which was published in 1995.