Trending
You are at:Home»365 DAYS-OF-HISTORY»October 13 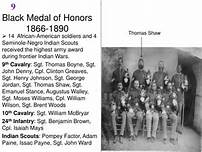 October 13, 1875 Adam Paine, a Black Seminole Indian, received the Medal of Honor, America’s highest military decoration, for his actions in the Indian Wars. Paine was born near Alachua, Florida in 1843. After the Civil War, Paine returned from Mexico and enlisted in the United States Army as a scout in 1873. He joined other Black Seminoles known as the “Seminole Negro Indian Scouts.” On September 26, he was serving as a private at Blanco Canyon in Texas where he participated in the engagement that earned him the medal. His citation reads: “Rendered invaluable service to Col. R.S. Mackenzie, 4th U. S. Cavalry, during this engagement.” Paine served two enlistments before being discharged in 1875. He died in 1877.