Trending
You are at:Home»365 DAYS-OF-HISTORY»October 1 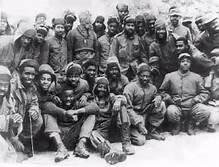 October 1, 1951 The 24th Infantry Regiment (the “Deuce-Four”), the last all-black military unit, was deactivated in Korea. The 24th Infantry Regiment was organized November 1, 1869 and fought in most of the United States’ wars until it was deactivated. In 1898, they were deployed to Cuba as part of the U. S. Expeditionary Force in the Spanish-American War. In 1899, they were deployed to the Philippine Islands to help suppress a guerilla movement in the Philippine-American War. In 1916, they guarded the U.S.-Mexican border to keep the Mexican Revolution from spilling onto U. S. soil. During World War II, the 24th Infantry fought in the South Pacific Theater and from the end of the war through 1947 they occupied Okinawa, Japan. In June, 1950, the 24th deployed to Korea where they fought throughout the Korean peninsula. The regiment received the Republic of Korea Presidential Unit Citation for their actions and two members of the regiment, Cornelius H. Charleton and William Thompson, posthumously received Medals of Honor for their actions in Korea.