Trending
You are at:Home»365 DAYS-OF-HISTORY»October 2 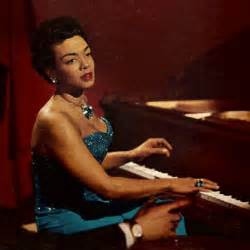 October 2, 1981 Hazel Dorothy Scott, jazz and classical pianist and singer, died. Scott was born June 11, 1920 in Port of Spain, Trinidad and Tobago, but raised in New York City. She performed extensively on the piano as a child and received further training at the Julliard School. In 1940, Scott starred at the opening of Barney Josephson’s Café Society Uptown in New York and soon her piano pyrotechnics were acclaimed throughout the United States and Europe. Scott appeared in a number of films, including “I Dood It” (1943), “Broadway Rhythm” (1944), and “Rhapsody in Blue” (1945). Scott was also the first woman of color to have her own television show, “The Hazel Scott Show,” which premiered in July, 1950. Due to racism and McCarthyism, the show was cancelled in September of that year when she was accused of being a Communist sympathizer. Albums released by Scott include “Hazel Scott’s Late Show” (1953) and “Relaxed Piano Mood” (1955).