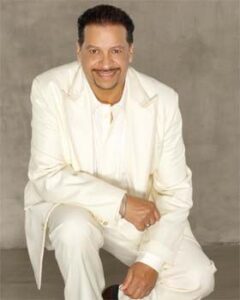 Smallwood’s recording career began in 1982 with the album The Richard Smallwood Singers. The album spent 87 weeks on Billboard’s Gospel chart. Its followup, Psalms was nominated for a Grammy. Two years later the album Textures was also nominated. Textures spawned the now-classic “Center Of My Joy” written by Richard Smallwood along with Bill and Gloria Gaither. He won his first Grammy, along with a Dove Award for his production on the Quincy Jones’ gospel project Handel’s Messiah: A Soulful Celebration.

His music has been recorded by artists such as Destiny’s Child, Yolanda Adams, Karen Clark-Sheard, and many more. He accompanied opera legend Leontyne Price at a White House Christmas celebration during the Reagan administration. Richard, with his current group Vision, has recorded several successful projects for Verity records.

He finished his master’s degree in Divinity from Howard University in 2004 and was inducted into the Gospel Music Hall of Fame in 2006.

His groups have been nominated for six Grammy Awards. Smallwood earned his Master of Divinity degree from Howard University in 2004 and was inducted into the Gospel Music Association Hall of Fame in 2006.

Smallwood’s next project was recorded live at the Hammerstein Ballroom at the Manhattan Center in New York. The concert features guests Kim Burrell on “Journey”, Kelly Price on “Morning’s Breaking,” Chaka Khan on “Precious Is Your Name,” as well as The Hawkins Family, Tramaine Hawkins, and the original roster of singers who comprised The Richard Smallwood Singers and Vision. Aretha Franklin and The Clark Sisters will contribute to additional studio tracks to appear on the album.