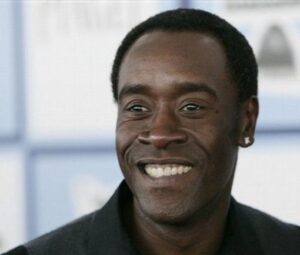 Cheadle co-wrote, directed and starred in Miles Ahead (2015), based on the life of jazz musician Miles Davis. He plays the superhero Colonel James ‘Rhodey’ Rhodes / War Machine in the Marvel Cinematic Universe and has appeared in Iron Man 2 (2010), Iron Man 3 (2013), Avengers: Age of Ultron (2015) and Captain America: Civil War (2016).

In 2004, Cheadle earned critical acclaim for his lead role as Rwandan hotel manager Paul Rusesabagina in the genocide drama film Hotel Rwanda, which was set during the Rwandan Genocide, and which earned him a nomination for an Academy Award for Best Actor. He stars as Marty Kaan on the Showtime sitcom House of Lies, for which he won a Golden Globe Award in 2013.

Cheadle has campaigned to end the genocide in Darfur, Sudan, and co-authored, with John Prendergast, a book about this issue, Not on Our Watch: the Mission to End Genocide in Darfur and Beyond. With George Clooney, Brad Pitt, Matt Damon, David Pressman, and Jerry Weintraub, Cheadle co-founded the Not On Our Watch Project, an organization focusing global attention and resources to stop and prevent mass atrocities. In 2010, Cheadle was named U.N. Environment Program Goodwill Ambassador.

Cheadle was born in Kansas City, Missouri, the son of Bettye (née North), a teacher, and Donald Frank Cheadle Sr., a clinical psychologist. He has a sister, Cindy, and a brother, Colin. His family moved from city to city throughout his childhood. He attended Hartley Elementary School in Lincoln, Nebraska, from 1970 to 1974.

Cheadle graduated in 1982 from East High School in Denver, Colorado, where he played saxophone in the jazz band, sang in the choirs and was active in the theatre department, performing in musicals, plays, and several mime shows all under the direction of Catherine Davis. After he graduated from East, Cheadle went on to California Institute of the Arts, graduating with a BFA in Acting.

Cheadle first became eligible for his Screen Actors Guild (SAG) card when he appeared as a burger joint employee in the 1985 comedy Moving Violations. He then appeared in Hamburger Hill in 1987, and played the role of Jack in the April 1, 1988 “Jung and the Restless” episode of Night Court. Although his character was supposed to be 16 years old, Cheadle was 23 at the time.

Cheadle then played the role of Rocket in the 1988 movie Colors. In 1989, he appeared in a video for Angela Winbush’s No. 2 hit single “It’s the Real Thing”, performing dance moves in an orange jump suit, working at a car wash.

In 1990, he appeared in an episode of The Fresh Prince of Bel-Air titled “Homeboy, Sweet Homeboy”, playing Will Smith’s friend and Hilary’s first love interest, Ice Tray.

Cheadle first received widespread notice for his portrayal of Mouse Alexander in the film Devil in a Blue Dress, for which he won Best Supporting Actor awards from the Los Angeles Film Critics Association and the National Society of Film Critics and was nominated for similar awards from the Screen Actors Guild and the NAACP Image Awards.

Following soon thereafter was his performance in the title role of the 1996 HBO TV movie Rebound: The Legend of Earl “The Goat” Manigault. He also starred in the 1997 film Volcano, directed by Mick Jackson.

Cheadle’s television credits include Emmy-nominated performances in the movies The Rat Pack, A Lesson Before Dying, Things Behind the Sun and in a guest appearance on ER. The last of these spanned four episodes during the show’s ninth season, in which he portrayed Paul Nathan, a medical student struggling to cope with Parkinson’s disease.

He has made appearances in films including Rosewood, The Family Man, Boogie Nights, a cameo appearance in the film Abby Singer, Out of Sight, Traffic, and Ocean’s Eleven. These last three were directed by Steven Sodebergh. In 2005, Cheadle was nominated for the Academy Award for Best Actor for his portrayal of Paul Rusesabagina in the film Hotel Rwanda.

He also starred in and co-produced Crash, which won the 2005 Academy Award for Best Picture. For his performance in Crash, Cheadle was nominated for the BAFTA and Screen Actors Guild. Awards for Best Supporting Actor. He played the main character in the movie Traitor.

In March 2007, Cheadle starred with comedian Adam Sandler in Mike Binder’s Reign Over Me, a comedy-drama about a man who has slipped away from reality after his wife and three daughters died. After playing for 38 days, the film became a box office flop earning a domestic gross of only 22.2 million. Cheadle later starred in the 2009 DreamWorks Pictures film Hotel for Dogs.

In 2007, Cheadle published a book, Not on Our Watch: The Mission to End Genocide in Darfur and Beyond, co-authored with John Prendergast. Cheadle was to make his directorial debut with the adaptation of Elmore Leonard’s Tishomingo Blues. In a July 2007 interview he stated, “‘Tishomingo’ is dead…”

Cheadle appeared in NFL commercials promoting the Super Bowl from 2002 to 2005. He so regularly appeared for the NFL in its Super Bowl advertising that in 2006, in a drive to get fans to submit their own advertising ideas, the NFL sought his permission to reference his previous commercials to portray themselves as having no new ideas: “he quickly signed off on the idea and found it funny.” Abe Sutton (along with Etan Bednarsh), one of the finalists in this NFL contest, played on this commercial by proposing an ad where an entire team of football players are Don Cheadle.

Cheadle and Boondocks creator Aaron McGruder are working together to launch a comedy show on NBC. The “project revolves around mismatched brothers who reunite to open a private security company.” Cheadle will serve as an executive producer, along with McGruder, who will write the script

In 2009, Cheadle performed in The People Speak, a documentary feature film that uses dramatic and musical performances of the letters, diaries, and speeches of everyday Americans, based on historian Howard Zinn’s A People’s History of the United States.

In 2010, Cheadle assumed the role of James Rhodes in the film Iron Man 2 and as well for its sequel Iron Man 3, replacing Terrence Howard. In 2010, Cheadle was appointed “U.N. Environment Program Goodwill Ambassador.” He and Prendergast published their second book, The Enough Moment: Fighting to End Africa’s Worst Human Rights Crimes, in 2010.

He also appeared in one of Derek Waters’ Drunk History videos as Frederick Douglass. Since January 8, 2012, he has starred in the Showtime TV series House of Lies. In 2013, he won the Golden Globe as Best Actor in a Comedy Series for his role on the show.

Cheadle had a role in the 2015 film Avengers: Age of Ultron and in the 2016 film Captain America: Civil War, reprising his character Col. James Rhodes.

Cheadle spent ten years writing and producing the film Miles Ahead, based on the life of jazz musician Miles Davis, which Cheadle also directed and starred in.

Locations for the movie were found in Cincinnati. The film was released in 2016.
In September 2015, Cheadle appeared (also as a red bird version of himself) in the promo ad for the Champions for Earth tournament in Angry Birds Friends.