Trending
You are at:Home»365 DAYS-OF-HISTORY»November 26 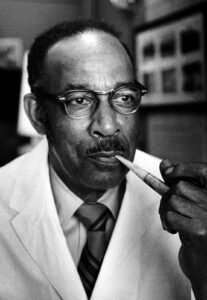 On this date in November 26, 1985, Vivien Theodore Thomas, surgical technician and animal surgeon died. Thomas was born August 29, 1910 in New Iberia, Louisiana. After graduating from high school, he had hoped to go to college and become a doctor. However, the Great Depression derailed his plans and in 1930 he secured a job with Dr. Alfred Blalock at Vanderbilt University. Although doing the job of a laboratory assistant, Thomas was classified and paid as a janitor. In 1941, Blalock accepted the position of chief of surgery at John Hopkins Hospital and requested that Thomas accompany him. On November 29, 1944, using the tools adapted by Thomas from the animal lab and with Thomas at his shoulder coaching him, Blalock performed the first surgery to relieve “blue baby syndrome.” The operation came to be known as the Blalock-Taussig shunt and Thomas received no mention. Over his 38 years at John Hopkins, Thomas trained many surgeons that went on to become chiefs of surgical departments around the country and in 1968 there was a commission of the painting of his portrait which hangs next to Blalock’s in the lobby of the Alfred Blalock Clinical Sciences Building. The Vivian Thomas Young Investigator Awards are given by the Council on Cardiovascular Surgery and Anesthesiology and in 2004 the city of Baltimore opened the Vivian T. Thomas Medical Arts Academy. Thomas’ autobiography, “Partners of the Heart: Vivian Thomas and his Work with Alfred Blalock,” was published in 1985 and, in 2004, his story was told in the HBO film “Something the Lord Made.”