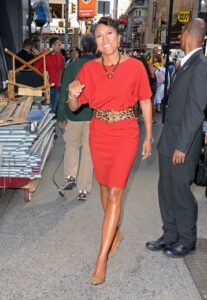 After growing up in Mississippi and attending Southeastern Louisiana University, Roberts was a sports anchor for local TV and radio stations. Roberts was a sportscaster on ESPN for 15 years (1990–2005). She became co-anchor on Good Morning America in 2005. She has been treated for breast cancer and for my elodys plastic syndrome.

Though born in Tuskegee, Alabama, Robin Roberts grew up in Pass Christian, Mississippi, where she played basketball and tennis, among other sports. She attended Pass Christian High School and graduated as the class of 1979 salutatorian. She is the daughter of Lucimarian (née Tolliver) and Colonel Lawrence E. Roberts.

In a 2006 presentation to the assembled student body at Abilene Christian University, Roberts credited her parents as cultivating the “three ‘D’s: Discipline, Determination, and ‘De Lord’.” She is the youngest of four, following siblings Sally-Ann, Lawrence, Jr. (nicknamed Butch), and Dorothy. Her father was a pilot with the Tuskegee Airmen.

Roberts noted on the January 14, 2007, edition of Costas on the Radio that she was offered a scholarship to play basketball at Louisiana State University but thought the school was too big and impersonal after visiting the campus. On her way back to Pass Christian from that visit, she saw a road sign for Southeastern Louisiana University, stopped to visit and decided to enroll. The only scholarship left was a tennis scholarship, and she was promised that there would be a journalism scholarship by the time she would graduate.

She went on to become a standout performer on the women’s basketball team, ending her career as the school’s third all-time leading scorer (1,446 points) and rebounder (1,034). Roberts is one of only three Lady Lions to score 1,000 career points and grab 1,000 career rebounds. During her senior season, she averaged a career-high 27.6 points per game. On February 5, 2011, Southeastern hosted a ceremony to retire Roberts’ jersey, number 21.

She joined ESPN as a sportscaster in February 1990, where she stayed until 2005. On SportsCenter, she used the catchphrase, “Go on with your bad self!” Roberts began to work for ABC News, specifically as a featured reporter for Good Morning America in June 1995. In 2001, Roberts received the Mel Greenberg Media Award, presented by the WBCA.

In December 2009, Roberts was joined by George Stephanopoulos as co-anchor of GMA after Diane Sawyer left to anchor ABC World News. Under their partnership, the Roberts-Stephanopoulos team led Good Morning America back to the top of the ratings; the program became the number-one morning show again in April 2012, beating NBC’s Today, which had held the top spot for the previous 16 years.

In the fall of 2005, Roberts anchored a series of emotional reports from the Mississippi Gulf Coast after it was devastated by Hurricane Katrina; her hometown of Pass Christian was especially hard hit, with her old high school reduced to rubble. On February 22, 2009, Roberts hosted the Academy Awards preshow for ABC, and did so again in 2011.

Roberts was inducted into the Women’s Basketball Hall of Fame as part of the Hall’s class of 2012 for her contributions to and impact on the game of women’s basketball through her broadcasting work and play. In 2014 Roberts was named one of ESPNW’s Impact 25.

In 2014, Roberts won the Walter Cronkite Award for Excellence in Journalism. Roberts was inducted into the Sports Broadcasting Hall of Fame as part of the class of 2016.