When one think of the home security systems, very seldom would you think an African American woman patent the first system in 1966, the patent was issued in 1969. Actually it is Marie Van Brittan Brown basic idea being used today, this system was designed where a camera would slide back and forth reaching four camera points which transmitted the images and audio back to the TV monitor.

A free African American almanac author, surveyor, naturalist, and farmer. Born in Baltimore County, Maryland, to a free African American woman and a former slave, Banneker had little formal education and was largely self-taught. He is known for being part of a group led by Major Andrew Ellicott that surveyed the borders of the original District of Columbia, the federal capital district of the United States.

Otis Boykin’s had many inventions, to include a wire precision resistor and a control unit for the pacemaker. He was born in Dallas, Texas. He graduated from Fisk College in 1941 and took a job with the Majestic Radio and TV Corporation. He later worked at P. J. Nilsen Research Laboratories. He began to invent products on his own, with some of his noteworthy inventions including a wire precision resistor used in televisions and radios and a control unit for the pacemaker. He died in 1982 of heart failure.

was born into poverty in his native land of Nigeria and with nine children his father earned only a modest income. Philip was forced to drop out of school at age fourteen to help support his family. Yet his father encouraged him to continue learning at home because Philip had shown such promise in mathematics. He spent many days in the library studying and he read through books appropriate for his age and moved on up to college-level material. Time went by and he applied for the General Certificate of Education exam and continued his education in college. By discovering a practical application for utilizing supercomputers, he opened a new market for computers. This research theory provided connectivity of computers around the world to provide a scalable, network through which to share and process information. By using his concept in conjunction with the existing internet backbone, the World Wide Web would emerge as a new entity for providing communications and enhancing commerce.

Harriet Tubman escaped from slavery in the South to become a leading abolitionist before the American Civil War. She was born into slavery in Maryland in 1820, and successfully escaped in 1849. Yet she risked her life and freedom and returned many times to rescue both family members and other slaves from the plantation system. Tubman led hundreds to freedom in the North as the most famous “conductor” on the Underground Railroad, an elaborate secret network of safe houses organized for that purpose. 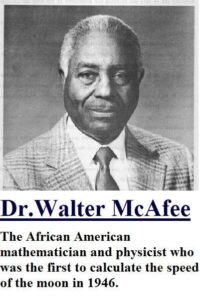 Walter Samuel McAfee, theoretical physicist, professor, and civil servant was born in Ore City, Texas to Susie and Luther McAfee on September 2, 1914.  His father, Luther McAfee, was a mechanic and carpenter, while his mother, Susie, was an educator.  McAfee earned a Bachelor’s degree in Mathematics in 1934 from Wiley College, a Historically Black College and University (HBCU) in Marshall, Texas. In 1937, he earned a Master’s of Science degree from Ohio State University.

Computer scientist and engineer Mark Dean is credited with helping develop a number of landmark technologies, including the color PC monitor, the Industry Standard Architecture system bus and the first gigahertz chip.

Patented One of the First Self-Propelled Street Sweepers
A black man from Newark, New Jersey, Charles B. Brooks, invented the U.S.’ first self-propelled street sweeper truck and patented it on March 17, 1896.

If you could imagine the days where a man would manually have to sweep the streets with a long horizontal head broom, shovel and dustpan, one would quickly surmise that this invention was not only a time saver but also extremely economical. Historically, prior to Brooks’ truck, streets were commonly cleaned by walking workers, picking up by hand or broom, or by horse-drawn machines. Brooks’ truck had brushes attached to the front fender that pushed trash to the curb

Inventor of the Illusion Transmitter
Did you ever think of what it might be like if your television could project the on-screen image directly into your living room as a 3-Dimensional image? Maybe not, but if it happens, you’ll have African-American inventor Valerie Thomas to thank for it.
From 1964 to 1995, Thomas worked in a variety of capacities for NASA where she developed real-time computer data systems, conducted large-scale experiments and managed various operations, projects and facilities. While managing a project for NASA’s image processing systems, Thomas’ team spearheaded the development of “Landsat,” the first satellite to send images from space.

When you see a truck on the highway transporting refrigerated or frozen food, you’re seeing the work of Frederick McKinley Jones. One of the most prolific Black inventors ever, Jones patented more than 60 inventions in his lifetime. While more than 40 of those patents were in the field of refrigeration, Jones is most famous for inventing an automatic refrigeration system for long haul trucks and railroad cars.

Before Jones’ invention, the only way to keep food cool in trucks was to load them with ice. Jones was inspired to invent the system after talking with a truck driver who lost his whole cargo of chicken because he couldn’t reach his destination before the ice melted. As a solution, the African-American inventor developed a roof-mounted cooling system to make sure food stayed fresh.

In addition to that refrigerator invention, Jones also invented an air-conditioning unit for military field hospitals, a refrigerator for military field kitchens, a self-starting gas engine, a series of devices for movie projectors and box-office equipment that gave tickets and made change. Jones was posthumously awarded the National Medal of Technology in 1991 – the first Black inventor to ever receive such an honor.