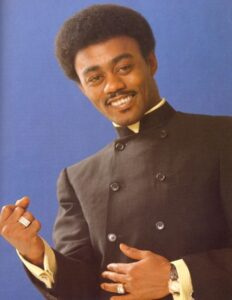 Johnnie Harrison Taylor (May 5, 1934 – May 31, 2000)[1] was a three-timeGrammy-nominated American recording artist and songwriter who performed a wide variety of genres, from blues, rhythm and blues, soul, and gospel to pop, doo-wop and disco.

Johnnie Taylor was born in Crawfordsville, Arkansas. He grew up in West Memphis, Arkansas, performing in gospel groups as a youngster. As an adult, he had one release, “Somewhere to Lay My Head”, on Chicago’s Chance Records label in the 1950s, as part of the gospel group Highway QCs, which had been founded by a young Sam Cooke. His singing then was strikingly close to that of Sam Cooke, and he was hired to take Cooke’s place in the latter’s gospel group, the Soul Stirrers, in 1957.

A few years later, after Cooke had established his independent SAR Records, Taylor signed on as one of the label’s first acts and recorded “Rome Wasn’t Built In A Day” in 1962. However, SAR Records quickly became defunct after Cooke’s death in 1964.

In 1966, Taylor moved to Stax Records in Memphis, Tennessee, where he was dubbed “The Philosopher of Soul”. He recorded with the label’s house band, which included Booker T. & the MGs. His hits included “I Had a Dream”, “I’ve Got to Love Somebody’s Baby” (both written by the team of Isaac Hayes and David Porter) and most notably “Who’s Making Love”, which reached No. 5 on the Billboard Hot 100chart and No. 1 on the R&B chart in 1968. “Who’s Making Love” sold over one million copies, and was awarded a gold disc. In 1970, Taylor married Gerlean Rocket and they remained married until his death in 2000.

Taylor, along with Isaac Hayes and The Staple Singers, was one of the label’s flagship artists, who were credited for keeping the company afloat in the late 1960s and early 1970s after the death of its biggest star, Otis Redding, in an aviation accident. He appeared in the documentary film, Wattstax, which was released in 1973.

After Stax folded in 1975, Taylor switched to Columbia Records, where he recorded his biggest success with Don Davis still in charge of production, “Disco Lady”, in 1976. It spent four weeks at number one on the Billboard Hot 100 and six weeks at the top of the R&B chart. It peaked at #25 in the UK Singles Chart in May 1976. “Disco Lady” was the first certifiedplatinum single (two million copies sold) by the RIAA. Taylor recorded several more successful albums and R&B single hits with Davis on Columbia, before Brad Shapiro took over production duties, but sales generally fell away.

Backed by members of The Muscle Shoals Rhythm Section, as well as in-house veterans such as former Stax keyboardistCarson Whitsett and guitarist/bandleader Bernard Jenkins, Malaco gave Taylor the type of recording freedom that Stax had given him in the late 1960s and early 1970s, enabling him to record ten albums for the label in his 16-year stint.

In 1996, Taylor’s eighth album for Malaco, Good Love!, reached number one on the Billboard Top Blues Albums chart (#15 R&B), and was the biggest record in Malaco’s history. With this success, Malaco recorded a live video of Taylor at theLonghorn Ballroom in Dallas, Texas, in the summer of 1997. The club portion of the Good Love video was recorded at 1001 Nightclub in Jackson, Mississippi.

Taylor’s final song was “Soul Heaven”, in which he dreamed of being at a concert featuring deceased African-American music icons from Louis Armstrong to Otis Redding to Z.Z. Hill to The Notorious B.I.G., among others.

In the 1980s, Johnnie Taylor was a DJ on KKDA-AM, a radio station in the Dallas area, where he had made his home. The station’s format was mostly R&B and Soul oldies and their on-the-air personalities were often local R&B, Soul, blues, and jazz musicians. Taylor was billed as “The Wailer, Johnnie Taylor”.