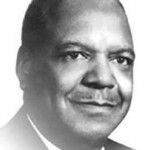 He earned his Doctor of Divinity degree from Detroit Baptist College and was ordained a minister in 1949. In 1950, he founded the International Free and Accepted Masons and Eastern Star. With Banks as the supreme director, the group raised money for numerous projects in the African American community, including establishing vocational schools like the Universal Barber College and International School of Cosmetology.

In 1964, Banks and the Masons bought WGPR, an FM radio station. In 1975, they secured a Federal Communications Commission license and bought WGPR-TV, making them the first African Americans to own a television station. Banks died August 24, 1985 and at his funeral Mayor of Detroit Coleman Young spoke of Banks’ lifelong commitment to Detroit, its citizens, and its future.

He said, “he did more than talk about this, he acted on it, he invested in it, and he had the kind of faith that kept this city moving.” Less than a decade after Bank’s death, the Masons sold the station for $24 million. His biography, “A Legacy of Dreams: The Life and Contributions of Dr. William Venoid Banks,” was published in 1999.