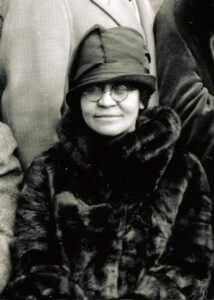 Born Annie Minerva Turnbo in Metropolis, Illinois, she suffered a stroke and died on May 10, 1957 at Chicago’s Provident Hospital. Annie was an entrepreneur and philanthropist who amased a fortune by developing and marketing a successful line of beauty and hair products for Black women. While in high school she took an interest in chemistry, she often missed school due to illness and while at home she continued her chemistry explodes. She would experiment with her hair care recipes on her sister’s hair.

Annie was able to produce a line of safe non-damaging, hair straighteners, special oils and hair growth products for African American women. These women had used goose fat, heavy oils, soap and other harsh products to straighten their kinky and thick hair, which caused damage to both scalp and hair.

Annie copyrighted her products under the name Poro (a West Afrikan name meaning physical and spiritual growth: the name of a Mende male secret society) because she felt that a number of fraudulent imitations or counterfeit versions were on the market. Due to the high demand for her product, in 1904 Annie opened her first shop on 2223 Market St. in St. Louis. Additionally, she launched a large advertising campaign in the black press, held press conferences, toured many southern states and recruited many women she trained to sell her products. She named her signature product “Wonderful Hair Grower” and to promote it, she began selling it from door-to-door.

In 1917, Malone, who was now worth well over a million dollars, built a five story multipurpose facility that included a beauty college she named Poro College. Poro College’s facilities included a dormitory, manufacturing plant, a retail store, business offices, a five hundred seat auditorium, a roof garden, dining and meeting rooms, a gymnasium, a bakery, a chapel, as well as servicing the community as a center for religious and social functions. The College’s curriculum included instructions to train students on personal style to present themselves at work: on walking, talking and style of dress designed to maintain a solid persona. The College employed nearly 200 people in St. Louis; the college created jobs for almost 75,000 women in North and South America, Africa and the Philippines with the school and franchise stations.

By the 1920s, Annie Malone had become a multi-millionaire and by 1924 her income tax came close to $40,000 and was reported to be the highest in Missouri. Though a multi-millionaire Annie lived modestly and gave thousands of dollars to the local black YMCA and the Howard University College of Medicine. She donated her money to, and served as president of, the St. Louis Colored Orphans Home. Annie served as the president on the board of directors of this home from 1919 to 1943. With her help, in 1922 it bought a facility at 2612 Annie Malone Drive (formally Goode Ave.) It continues to serve from the historic Ville neighborhood. Upgraded and expanded, the facility was renamed in her honor as the Annie Malone Children and Family Service Center. As well as funding many programs, Annie made sure her employees, mostly black, were paid well and given opportunities for advancement.

Business for Annie was great until 1927 when the president of her company who was also her husband filed suit for a divorce demanding half of her business claiming that it was his knowledge that was the force behind the success of the business. This divorce suit forced Poro College into a court-ordered receivership. Due to Annie having much support from her employees and powerful figures such as Mary McLeod Bethune, she was able to negotiate a settlement of $200,000, affirming her, the sole owner of Poro College and a divorce was granted.

After the divorce Annie moved her business to Chicago’s South Parkway where she bought an entire city block. Unfortunately for Annie, the divorce opened the door for other lawsuits and in 1937 a former employee claimed credit for her success and the settlement of this lawsuit forced Annie to sell her St. Louis property. Although her business was much smaller, it still continued to thrive. On May 10, 1957 Annie suffered a stroke and died at Chicago’s Provident Hospital. At the time of her death, Annie’s estate was valued at only $100,000 due to the many losses her business faced