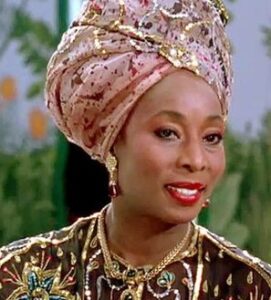 1938 Madge Dorita Walters Sinclair, actress, was born in Kingston, Jamaica. Sinclair was a teacher in Jamaica until 1968 when she moved to New York City to pursue an acting career. In 1977, she appeared in the television mini-series “Roots,” a role which earned her an Emmy nomination for Best Actress in a Drama.

From 1979 to 1986, she appeared in the series “Trapper John, M. D.” and earned three Emmy nominations for her work on that show. In 1988, she appeared in the film “Coming to America” and in 1990 she was a regular in the television series “Gabriel’s Fire,” for which she won the 1991 Emmy Award for Best Supporting Actress in a Dramatic Series.

Born Madge Dorita Walters in Kingston, Jamaica, to Herbert and Jemima Walters, she was a teacher in Jamaica until 1968 when she left for New York to pursue her career in acting. She landed a role in Roots, she starred in the 1978 film Convoy as the Widow Woman, and she played Leona Hamiltons in Cornbread, Earl and Me.

Sinclair received an Emmy Award nomination for her role as Belle in the miniseries Roots. Also in 1978, she co-starred in the short-lived sitcom Grandpa Goes to Washington. Sinclair went on to a long-running stint in the 1980s as nurse Ernestine Shoop on the series Trapper John, M.D. opposite Pernell Roberts.

She received three Emmy nominations for her work on the show, and critic Donald Bogle praised her for “maintaining her composure and assurance no matter what the script imposed on her”.

In 1988, Sinclair played Queen Aoleon alongside James Earl Jones’ King Jaffe Joffer in the Eddie Murphy comedy Coming to America, which reunited her on screen with her Roots husband and co-star John Amos. Later, both Sinclair and Jones would reunite as Queen and King for the roles of Sarabi, Simba’s mother, and Mufasa, Simba’s father, in the blockbuster Disney animated film The Lion King (1994), respectively.

The film became one of the best-selling titles ever on home video. It would also be her last film role. The two also collaborated on the series Gabriel’s Fire, which earned Sinclair an Emmy in 1991 for Best Supporting Actress in a Dramatic Series, famously beating out the expected winner, L.A. Law’s Diana Muldaur.

Sinclair played the role of Lally in the 1991 Channel 4 television miniseries The Orchid House (based on Phyllis Shand Allfrey’s novel of the same name), directed by Horace Ové, and also received critical praise for her supporting role in the 1992 television movie Jonathan: The Boy Nobody Wanted with JoBeth Williams. In 1993, Sinclair came to London to appear on stage at the Cochrane Theatre in The Lion, by Michael Abbensetts, directed by Horace Ové for the Talawa Theatre Company.

In 1994, she played a supporting role in the short-lived ABC-TV sitcom Me and the Boys, which starred Steve Harvey. Sinclair, in her brief role as the captain of the USS Saratoga in Star Trek IV: The Voyage Home, is commonly cited as the first female Starfleet starship captain to appear in Star Trek. (Joanne Linville had appeared as a Romulan commander 18 years earlier.) Years later, Sinclair played Geordi La Forge’s mother, captain of the USS Hera, in Star Trek: The Next Generation’s “Interface”. Her final acting role was on the sitcom Dream On just one month later before her death.