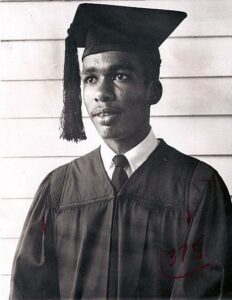 Ernest Green was born in Little Rock in 1941 to Lothaire and Ernest Green, Sr. Ernest had a brother, Scott, and a sister Treopia Washington.

Like the rest of the Little Rock Nine, Green came from a family which placed a lot of emphasis on the importance of education and personal development. Consequently, Green participated in church activities and the Boy Scouts of America, eventually earning the rank of Eagle Scout. He attended segregated Dunbar Junior High School and graduated after ninth grade, at which time he was assigned to Horace Mann High School, a new high school for African-Americans.

At the end of his junior year at Horace Mann, Green volunteered to attend the all-white Little Rock Central High School in fall of 1957 and help desegregate one of the nation’s largest schools. Central High offered a wider and more complex curriculum than Horace Mann did, making educational opportunities available quite desirable.

Green became the only senior among the nine African Americans who decided to integrate Central High that fall. Not only did Green survive the daily harassment and intermittent violence the rest of the Little Rock Nine experienced, he had to study extraordinarily hard to make sure he graduated and could demonstrate that African Americans were equally capable of attending Central High as anyone else.

Ernest Green made history on May 27, 1958, when he became the first of the Little Rock Nine, and the first African-American, to graduate from Little Rock’s Central High School. Martin Luther King, Jr., who was in Arkansas to speak at Arkansas Agriculture Mechanical and Normal College’s commencement in Pine Bluff, attended the graduation with the Green family.

Following his brush with national fame, Green attended Michigan State University as the beneficiary of a scholarship provided by an anonymous donor. While at Michigan State, Green continued to engage in activism and protests supporting the Civil Rights Movement.

He later learned that the anonymous donor was John A. Hannah, the president of Michigan State, and ironically, an occasional target of protests by Civil Rights activists including Green. Green graduated with a Bachelor of Arts in 1962 and a Master’s degree in sociology in 1964. Green also was the top of his class.