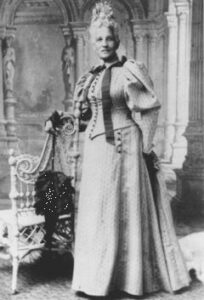 Elizabeth Keckley, personal dressmaker and confidante of Mary Todd Lincoln, died. Keckley was born enslaved in February, 1818 in Dinwiddie, Virginia. As a teenager, she endured a number of severe beatings and sexual abuse.

In 1847, the family she served moved to St. Louis, Missouri where Keckley used her dressmaking skills to establish connections with the town’s white upper-class women. By 1855, with the help of her patrons, she was able to buy her and her son’s freedom for $1,200.

In 1860, Keckley moved to Washington, D.C. where in 1861 Mary Todd Lincoln, United States First Lady, chose her as her personal dressmaker.

For the next six years, Keckley was the sole designer and creator of Mrs. Lincoln’s event wardrobe. This also allowed Keckley an intimate view of the First Family. After the assassination of President Abraham Lincoln, Keckley provided solace, comfort, and reliability of Mrs. Lincoln.

Keckley was a celebrity in the D.C. black community and used her connections to found the Contraband Relief Association in 1862. The CRA provided food, shelter, clothing, and emotional support to recently freed people and sick and wounded soldiers.

In 1868, she published her autobiography, “Behind the Scenes Or, Thirty Years a Slave and Four Years in the White House.” After her relationship with Mrs. Lincoln ended, Keckley moved to a number of locations before accepting a position at Wilberforce University as head of the Department of Sewing and Domestic Science Arts in 1892.

“Mrs. Lincoln and Mrs. Keckley: The Remarkable Story of the Friendship between a First Lady and a Former Slave” was published in 2004.