Trending
You are at:Home»365 DAYS-OF-HISTORY»May 25 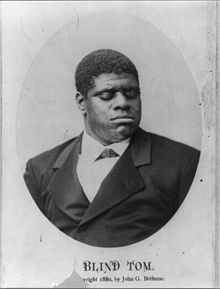 May 25, 1849 Thomas “Blind Tom” Wiggins, autistic savant and piano music prodigy, was born enslaved and blind in Harris County, Georgia. By the age of four, Wiggins had acquired piano skills based solely on hearing and at the age of five composed his first tune, “The Rain Storm.” At the age of eight, Wiggins was licensed to a traveling show and marketed as a “Barnum style freak.” In 1860, Wiggins performed at the White House for President James Buchanan and in 1866 he was taken on a European concert tour. It was said that his memory was prodigious and he never forgot anything, he was often called “a human parrot.” During the latter part of the 19th century, he was one of the most well known American pianists. Despite his fame, Wiggins was exploited, deceived and robbed of the money he earned by this white guardians. Wiggins died June 14, 1908 and his biography, “The Ballad of Blind Tom, Slave Pianist” was published in 2009.