Trending
You are at:Home»365 DAYS-OF-HISTORY»May 23 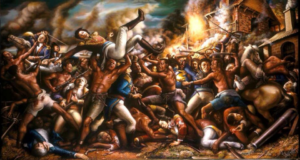 May 23, 1832 Samuel Sharpe, national hero of Jamaica, was hanged for leading the Christmas Rebellion. Sharpe was born enslaved in 1801 in St. James, Jamaica. Although enslaved, Sharpe was allowed to be educated and became a preacher and leader in the enslaved community. On December 25, 1831, he organized a peaceful strike of several estates in western Jamaica during sugar cane harvest time. As a result of reprisals by the plantation owners, the strikers burned the crops. This caused the peaceful protest to turn into Jamaica’s largest slave rebellion, resulting in hundreds of black and 14 white deaths. The Jamaican military ended the rebellion within two weeks and many of the leaders, including Sharpe were hanged. Just before he was hanged, Sharpe stated “I would rather die among yonder gallows, than live in slavery.” In 1975, the government of Jamaica proclaimed Sharpe a National Hero and Sam Sharpe Teachers’ College was founded. Sharpe’s image is also on the Jamaican $50 bill.