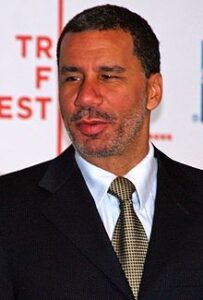 David Alexander Paterson (born May 20, 1954) is an American politician who served as the 55th Governor of New York, succeeding Eliot Spitzer and serving out the final two years of Spitzer’s term from 2008 to 2010. He is the first African American to hold that position and the second legally blind U.S. Governor of any state after Bob C. Riley, who was Acting Governor of Arkansas for 11 days in January 1975.

Since leaving office, Paterson has been a radio talk show host on station WOR in New York City, and was in 2014 appointed chairman of the New York Democratic Party by his successor as governor, Andrew Cuomo.

After graduating from Hofstra Law School, Paterson worked in the district attorney’s office of Queens County, New York, and on the staff of Manhattan borough president David Dinkins. In 1985, he was elected to the New York state senate to a seat that was once held by his father, former New York secretary of state Basil Paterson.

In 2003, he rose to the position of Senate minority leader. Paterson was selected as running mate by then-New York attorney general and Democratic Party gubernatorial nominee Eliot Spitzer in the 2006 New York gubernatorial election. Spitzer and Paterson were elected in November 2006 with 69 percent of the vote, and Paterson took office as lieutenant governor on January 1, 2007.

When Spitzer resigned in the wake of a prostitution scandal, Paterson was sworn in as Governor of New York on March 17, 2008. Paterson launched a brief campaign for a full term as Governor in the 2010 gubernatorial election, but announced on February 26, 2010 that he would not be a candidate in the Democratic primary.