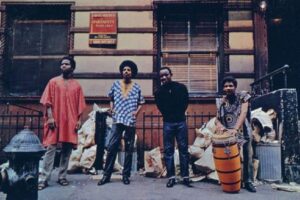 The Last Poets are several groups of poets and musicians who arose from the late 1960s African-American civil rights movement’s black nationalist movement. The name is taken from a poem by the South African revolutionary poet Keorapetse Kgositsile, who believed he was in the last era of poetry before guns would take over. The original users of that name were the trio of Felipe Luciano, Gylan Kain, and David Nelson.

However, it is the versions of the group led by Jalaluddin Mansur Nuriddin and/or Umar Bin Hassan that have penetrated mass culture. The Last Poets were one of the earliest influences on hip-hop music. Critic Jason Ankeny wrote: “With their politically charged raps, taut rhythms, and dedication to raising African-American consciousness, the Last Poets almost single-handedly laid the groundwork for the emergence of hip-hop.”

Luciano, Kain, and Nelson recorded separately as The Original Last Poets, gaining some renown as the soundtrack artists of the 1971 film Right On!
In 1972, they appeared on Black Forum Records album Black Spirits – Festival Of New Black Poets In America with “And See Her Image In The River” and “Song of Ditla, part II”, recorded live at the Apollo Theatre, Harlem, New York. A book of the same name was published by Random House (1972 – ISBN 9780394476209).

The original group actually consisted of Gylan Kain, David Nelson and Abiodun Oyowele. Nelson left in the fall of 1968 and was replaced by Felipe Luciano, then Luciano left to start the Young Lords and was replaced by Alafia Pudim (later known as Jalaluddin Mansur). Following the success of the reformed Last Poets first album, Luciano, Kain, and Nelson reunited to record their only album Right On in 1967, the soundtrack to a documentary movie of the same name that finally saw release in 1971,(See also Performance (1970 film featuring Mick Jagger) soundtrack song “Wake Up, Niggers”).

The Right On album was released under the group name The Original Last Poets to simultaneously establish their primacy and distance themselves from the other group of the same name way for the many socially committed Black [emcees]a decade later.”

In 2011, The Last Poets Abiodun Oyewole and Umar Bin Hassan performed at The Jazz Cafe in London, in a tribute concert to the late Gil Scott-Heron and all the former Last Poets.

In 2014, Last Poet Jalaluddin Mansur Nuriddin came to London and also performed at The Jazz Cafe with Jazz Warriors the first ever live performance in 40 years of the now iconic “Hustlers Convention”. The event was produced by Fore-Word Press and featured Liverpool poet Malik Al Nasir with his band Malik & the O.G’s featuring Cleveland Watkiss, Orphy Robinson and Tony Remy.

The event was filmed as part of a documentary on the “Hustlers Convention” by Manchester film maker Mike Todd and Riverhorse Communications. The executive producer was Public Enemy’s Chuck D. As part of the event Charly Records re-issued a special limited edition of the vinyl version of Hustlers Convention to celebrate their 40th anniversary. The event was MC’d by poet Lemn Sissay and the DJ was Shiftless Shuffle’s Perry Louis.

In 2016, The Last Poets (World Editions, UK), was published. The novel, written by Christine Otten, was originally published in Dutch in 2011, and has now been translated by Jonathan Reeder for English readers.