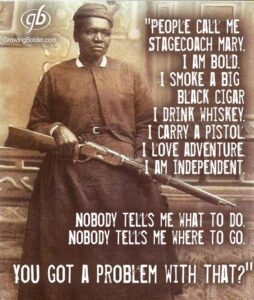 Mary Fields (c. 1832–1914), also known as Stagecoach Mary and Black Mary, was the first African-American woman star route mail carrier in the United States. She was not an employee of the United States Post Office’s; the Post Office Department did not hire or employ mail carriers for star routes but rather awarded star route contracts to persons who proposed the lowest qualified bids, and who in accordance with the Department’s application process posted bonds and sureties to substantiate their ability to finance the route.

Once a contract was obtained, the contractor could then drive the route themselves, sublet the route, or hire an experienced driver. Some individuals obtained multiple star route contracts and conducted the operations as a business.

Fields obtained the star route contract for the delivery of U.S. mail from Cascade, Montana to Saint Peter’s Mission in 1885. She drove the route with horse and wagon, not a stagecoach, for two four-year contracts: from 1885 to 1889 and from 1889 to 1893.

Born a slave in Hickman County, Tennessee, circa 1832, Fields was freed when slavery was outlawed in the United States, in 1865. She then worked in the home of Judge Edmund Dunne. When Dunne’s wife Josephine died in 1883, in San Antonio, Florida, Fields took the family’s five children to their aunt, Mother Mary Amadeus, the mother superior of an Ursuline convent in Toledo, Ohio.

In 1884, Mother Amadeus was sent to Montana Territory to establish a school for Native American girls at St. Peter’s Mission, west of Cascade. Learning that Amadeus was stricken with pneumonia, Fields hurried to Montana to nurse her back to health. Amadeus recovered, and Fields stayed at St. Peter’s, hauling freight, doing laundry, growing vegetables, tending chickens, and repairing buildings, and eventually became the forewoman.

The Native Americans called Fields “White Crow”, because “she acts like a white woman but has black skin”. Local whites did not know what to make of her. One schoolgirl wrote an essay saying, “She drinks whiskey, and she swears, and she is a republican, which makes her a low, foul creature.”

In 1894, after several complaints and an incident with a disgruntled male subordinate that involved gunplay, the bishop ordered her to leave the convent. Mother Amadeus helped her open a restaurant in nearby Cascade. Fields would serve food to anyone, whether they could pay or not, and the restaurant went broke in about 10 months.

In 1895, although approximately 60 years old, Fields was hired as a mail carrier because she was the fastest applicant to hitch a team of six horses, this made her the second woman and first African American woman to work for the U.S. Postal Service.

She drove the route with horses and a mule named Moses. She never missed a day, and her reliability earned her the nickname “Stagecoach”. If the snow was too deep for her horses, Fields delivered the mail on snowshoes, carrying the sacks on her shoulders.

She was a respected public figure in Cascade, and the town closed its schools to celebrate her birthday each year. When Montana passed a law forbidding women to enter saloons, the mayor of Cascade granted her an exemption. In 1903, at age 71, Fields retired from star route mail carrier service. She continued to babysit many Cascade children and owned and operated a laundry service from her home.

Fields died in 1914 at Columbus Hospital in Great Falls, but she was buried outside Cascade.