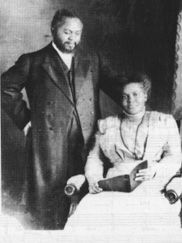 William Joseph Seymour (May 2, 1870 – September 28, 1922) was an American minister, and an initiator of the Azusa Street Revival. Seymour was one of the most influential individuals in the revival movement that grew into the Pentecostal and Charismatic movements, along with other figures such as Charles Parham, Howard A. Goss, and Frank Bartleman. Seymour’s emphasis on racial equality drew many historically disenfranchised people to the movement, and due to his influence the revival grew very quickly.

Seymour was born to former slaves Simon and Phyllis Salabar Seymour in Centerville, Louisiana. He was baptized at the Roman Catholic Church of the Assumption in Franklin, and attended the New Providence Baptist Church in Centerville with his family. The racial violence in the American South at this time — Louisiana had one of the highest rates of lynchings in the nation — would have a huge effect on Seymour’s later emphasis on racial equality at the Azusa mission.

In the 1890s, Seymour left the South in order to travel north, to places such as Memphis, St. Louis, and Indianapolis. By doing this, he escaped the horrific violence aimed at African Americans in the south during this period. Though he would continue to face racial prejudice in the north, it was not at the violent level that he faced in the South. In 1895, Seymour moved to Indianapolis, where he attended the Simpson Chapel Methodist Episcopal Church. It was at this church where Seymour became a born-again Christian.

During Seymour’s travels, he was influenced by Daniel S. Warner’s Evening Light Saints, a Holiness group dedicated to racial equality. Their view of a racially egalitarian church would influence his theology for the rest of his life. In 1901, Seymour moved to Cincinnati, where his views on holiness and racial integration were shaped by a Bible school he attended. During this time, he contracted smallpox and subsequently went blind in his left eye. After overcoming the smallpox Seymour was ordained by the Evening Light Saints. Seymour then traveled to Jackson, Mississippi, where he visited Charles Price Jones, and left the South with a very firm commitment to his beliefs.

In 1906, due to the encouragement of his friend Lucy F. Farrow, Seymour joined a newly formed Bible school founded by Charles Parham in Houston, Texas. Parham’s teachings on the baptism of the Holy Spirit stuck with Seymour and influenced his later doctrine and theology. Seymour did not agree, however, with some of Parham’s more radical views.

He developed a belief in glossolalia (“speaking in tongues”) as a confirmation of the gifts of the Holy Spirit when he witnessed it from one of his followers. He believed this proved that the person was born-again and could then go to Heaven. Seymour did not remain at the school for very long — he spent just six weeks there, and left before his studies were complete. In late January or early February 1906, Neely Terry asked Seymour to pastor a church in Los Angeles. Feeling called by God, Seymour took the opportunity against Parham’s wishes, and moved to Los Angeles.

The spirit of revival spread from Azusa all over the United States, and many missions modeled themselves after Azusa, especially the racially integrated services. By 1914, Pentecostalism had spread to almost every major U.S. city. The egalitarian message was very attractive to many people experiencing some sort of racial division all over the world.

The mission quickly spread all around the world: from Liberia, to the Middle East, to Sweden and Norway, the Pentecostal message flourished rapidly and many of the missionaries spreading the new message had themselves been at the Azusa revival. Seymour’s global influence spread far beyond his direct interactions with the missions.

Protestant Pentecostals trace their roots back to early leaders such as Seymour, and estimates of worldwide Pentecostal membership ranges from 115 million to 400 million. Most modern Charismatic groups can claim some lineage to the Azusa Street Revival and Seymour.

Pentecostalism is the second largest Christian denomination in Latin America, behind Roman Catholicism, and many African churches are Pentecostal or Charismatic in practice. While there were many other centers for revivals, such as Topeka, India, and Chicago, it was the socially transgressive and egalitarian message of Azusa that appealed to many converts.

Many specific doctrines taught at Azusa, such as glossolalia, are still taught today, as opposed to Parham’s xenoglossy. While the movement largely fractured along racial lines within a decade, the splits were in some ways less deep than the vast divide that seems often to separate many white religious denominations from their black counterparts.