Trending
You are at:Home»365 DAYS-OF-HISTORY»May 19 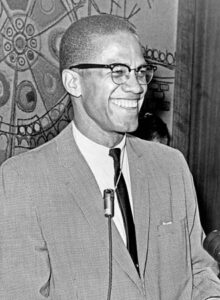 May 19, 1925 Malcolm X, Muslim minister and human rights leader, was born Malcolm Little in Omaha, Nebraska, but grew up in Lansing, Michigan. In 1946, he was sentenced to prison where he became a member of the Nation of Islam. After his parole in 1952, he became one of the Nation’s leaders and chief spokesman. In 1953, he was named assistant minister of Temple Number One in Detroit, Michigan and by 1954 he had established Boston’s Temple Number Eleven and expanded Philadelphia’s Temple Number Twelve.

Until his departure from the organization in March, 1964, Malcolm X was the public face of the Nation of Islam. After leaving, he became a Sunni Muslim, changed his name to El-Hajj Malik El-Shabazz, made a pilgrimage to Mecca, and founded the Organization of Afro-American Unity. On February 21, 1965, he was assassinated. At his funeral, Ossie Davis delivered his eulogy and described him as “our shining Black prince.” His autobiography, “The Autobiography of Malcolm X,” was published shortly after his death and in 1992 the film “Malcolm X” was released.

Many streets and schools around the country are named in honor of him, including El-Hajj Malik El-Shabazz Academy in Lansing. In 1999, the United States Postal Service issued a commemorative postage stamp in his honor and in 2005 Columbia University opened the Malcolm X and Dr. Betty Shabazz Memorial and Educational Center. The Malcolm X House Site in North Omaha, Nebraska is listed on the National Register of Historic Places “because of the importance of Malcolm X to American history and national culture.” A biography, “Malcolm X: A Life of Reinvention,” was published in 2011. His name is enshrined in the Ring of Genealogy at the Charles H. Wright Museum of African American History in Detroit, Michigan.