Trending
You are at:Home»365 DAYS-OF-HISTORY»May 18 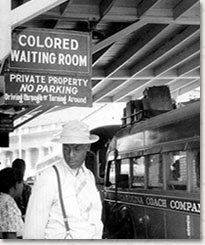 May 18, 1896 The Supreme Court of the United States in the case of Plessy v. Ferguson by a vote of 7 to 1 upheld the constitutionality of racial segregation in public accommodations under the doctrine of “separate but equal.” In 1890, Louisiana passed an act that required separate accommodations for African Americans and whites on railroads, although it specified that the accommodations must be equal. In reaction, concerned African Americans and whites formed the Citizen’s Committee to Test the Separate Car Act and in 1892 recruited Homer Plessy, a free born person that was one-eighth black and seven-eighths white, but considered black under Louisiana law, to test the law. Plessy was arrested and found guilty of violating the Separate Car Act by sitting in the “White” car. His case was adjudicated to the Supreme Court where the lower court decision was upheld. “Separate but equal” remained standard doctrine in U.S. law until it was repudiated in the 1954 Supreme Court decision in Brown v. Board of Education.