Trending
You are at:Home»365 DAYS-OF-HISTORY»May 16 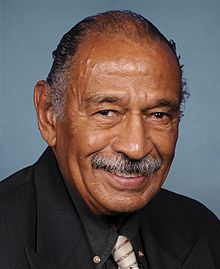 May 16, 1929 John Conyers, Jr., the longest serving black Congressman in the United States House of Representatives, was born in Highland Park, Michigan. From 1950 to 1954, Conyers served in the United States Army, serving one year in Korea where he was awarded combat and merit citations. Conyers earned his Bachelor of Arts degree in 1957 and his Bachelor of Laws degree in 1958 from Wayne State University. He was first elected to Congress in 1964 and has been reelected 22 times. During his time in Congress, Conyers served as chairman of the House Government Operations Committee from 1989 to 1995 and chairman of the House Judiciary Committee from 2007 to 2011. Conyers was a founding member of the Congressional Black Caucus and he introduced the first bill in Congress to make Martin Luther King’s birthday a national holiday. Conyers was the 2007 recipient of the NAACP Spingarn Medal.