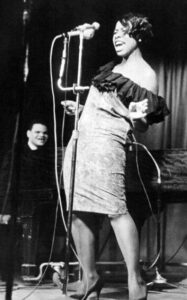 Ms. Betty Carter, Lillie Mae Jones, was born in Flint, Michigan and grew up in Detroit, where her father led a church choir. She studied piano at the Detroit Conservatory. She won a talent contest and became a regular on the local club circuit, singing and playing piano. When she was 16, she sang with Charlie Parker, and she later performed with Dizzy Gillespie, Ray Charles and Miles Davis.

Carter honed her scat singing ability while on tour with Lionel Hampton in the late 1940s. Hampton’s wife Gladys gave her the nickname “Betty Bebop”, a nickname she reportedly detested. In the 1950s Carter made recordings with King Pleasure and the Ray Bryant Trio. Her first solo LP, Out There, was released on the Peacock label in 1958.

Carter’s career was eclipsed somewhat through the 1960s and 1970s, though a series of duets with Ray Charles in 1961, including the R&B-chart-topping “Baby, It’s Cold Outside,” brought her a measure of popular recognition. In 1963 she toured in Japan with Sonny Rollins. She recorded for various labels during this period, including ABC-Paramount, Atco and United Artists, but was rarely satisfied with the resulting product.

In 1970, a record company A&R man tried to run off with a set of her master recordings; the incident led her to establish her own record label, Bet-Car. Some of her most famous recordings were originally issued on Bet-Car, including the double album The Audience with Betty Carter (1980). In 1980 she was the subject of a documentary film by Michelle Parkerson, But Then, She’s Betty Carter.

In the last decade of her life, Carter finally began to receive wider acclaim and recognition. In 1987 she signed with Verve Records, who reissued most of her Bet-Car albums on CD for the first time and made them available to wider audiences. In 1988 she won a Grammy for her album Look What I Got! and sang in a guest appearance on The Cosby Show (episode “How Do You Get to Carnegie Hall?”).

In 1994 she performed at the White House and was a headliner at Verve’s 50th anniversary celebration in Carnegie Hall. In 1997 she was awarded a National Medal of Arts by President Bill Clinton. Carter remained active in jazz until her death from pancreatic cancer in 1998, aged 69.