Trending
You are at:Home»365 DAYS-OF-HISTORY»May 15 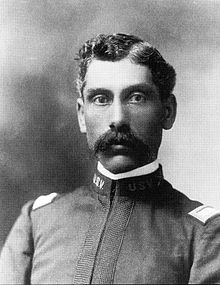 May 15, 1890 William McBryar received the Congressional Medal of Honor, America’s highest military decoration, for his actions during the Indian Wars. His citation reads, “Distinguished himself for coolness, bravery, and marksmanship while his troop was in pursuit of hostile Apache Indians.” McBryar was born February 14, 1861 in Elizabethtown, North Carolina. He joined the United States Army as a Buffalo Soldier and by March 7, 1890 was serving as a sergeant in Company K of the 10th Cavalry Regiment. For his actions on that date, he was awarded the medal. McBryar later became a commissioned officer and left the army as a first lieutenant. He died March 8, 1941 and was buried in Arlington National Cemetery.