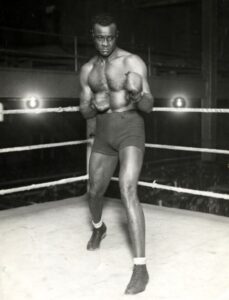 Harry “The Black Panther” Wills, hall of fame boxer, was born in New Orleans, Louisiana. Wills began his professional boxing career in 1911 and fought for over 20 years, a heavyweight boxer who three times held the World Colored Heavyweight Championship often ranked as the number one challenger for the World Heavyweight title but never given the opportunity to fight for the title due to his race.

He spent six years trying to land a fight with Jack Dempsey, who was willing to fight him, but the Governor of the State of New York would not allow it fearing that race riots would follow the fight. Many boxing historians consider Willis the most egregious victim of the “color line” drawn by white heavyweight champions. Of all the black contenders between the heavyweight championship reigns of Jack Johnson and Joe Louis, Wills came closest to securing a title shot.

Wills fought many of the top heavyweights of his era. He defeated Willie Meehan, who had decisioned Jack Dempsey, Gunboat Smith and Charley Weinart. He also fought Luis Firpo in a match that ended in No Decision. Wills faced future heavyweight champion Jack Sharkey in 1926, and was being decisively beaten when he was disqualified.

The next year, Wills was knocked out by heavyweight contender Paolino Uzcudun in a bout that signalled the end of his reign as a serious title contender. His final record was 75 wins (with 47 knockouts), 9 losses and 2 draws. In 2003, he was named to the Ring Magazine’s list of 100 greatest punchers of all time.

After retiring, he ran a successful real estate business until his death on December 21, 1958. Wills was posthumously inducted into the International Boxing Hall of Fame in 1992.