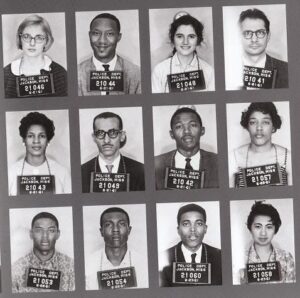 On May 14, 1961, Freedom Riders were brutally attacked by violent, well-armed and organized mobs of Klansmen and other terrorists in Anniston and Birmingham, Ala. The vicious beatings and a firebombing of the Anniston-bound bus by the Ku Klux Klan had the support of local law enforcement and politicians.

Before the Trailways bus pulled into the Birmingham terminal, “Bull” Connor and his police department “with the Ku Klux Klan; when the bus arrives at the terminal, the mob will have 15 minutes to burn, bomb, kill and maim without police intervention or arrests. Freedom Rider James Peck and others are severely injured in the riot that follows.

“Eventually, the original CORE Freedom Riders are transported to the Birmingham airport, in hopes of flying to their original destination, New Orleans. The Kennedy Administration dispatches John Seigenthaler, assistant to the attorney general, to Birmingham to ensure the safe departure of the Riders. Seigenthaler is able to secure a flight for the Riders, and a plane transports them to New Orleans. ”

Earlier in the day, the seven Freedom Riders on a Greyhound bus bound for Anniston were terrorized by Klansmen while on the bus, when they arrived at the terminal, and after they departed.

The racist thugs smashed windows, slashed tires and threatened the Riders before local police escorted the bus out of town. The bus, followed by a long line of cars and trucks and six miles out of town, was forced to pull over.

The mob resumed its attack, throwing a firebomb through a broken window on the bus. The Riders barely escape but many suffered smoke inhalation. One rider, Hank Thomas, after stumbling off the bus with lungs full of smoke was met by a Ku Kluxer and beaten with a baseball bat, leaving the student barely conscious.

During the Anniston attack, “[o]ne little girl, twelve-year-old Janie Miller, supplied the choking victims with water, filling and refilling a five-gallon bucket while braving the insults and taunts of Klansmen. Later ostracized and threatened for this act of kindness, she and her family found it impossible to remain in Anniston in the aftermath of the bus bombing.”

If that wasn’t enough, the riders had more trouble getting to the hospital for treatment and receiving it once there. The ambulance driver refused to carry any African American riders. Arsenault writes, “After a few moments of awkward silence, the white Riders, already loaded into the ambulance, began to exit, insisting they could not leave their black friends behind. [Eventually]…the driver’s resolve weakened, and before long the integrated band was on its way to Anniston Memorial Hospital.”

Once in the hospital the riders were faced with racist administrators and a mob threatening to burn the hospital down. While mobs prepared to attack Freedom Riders in Birmingham, the Rev. Fred Shuttlesworth organized a convoy of deacons to drive to Anniston and rescue the riders. As they walked to the cars, rider “Buck Johnson later recalled, ‘Some of them had clubs. There were some deputies too. You couldn’t tell the deputies from the Ku Klux.’”