Trending
You are at:Home»365 DAYS-OF-HISTORY»May 13 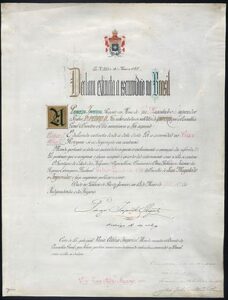 The Lei Áurea (Portuguese pronunciation: [?lej ?aw?i?]; English: Golden Law), adopted on May 13, 1888, was the law that abolished slavery in Brazil. It was signed by Isabel, Princess Imperial of Brazil (1846–1921), an opponent of slavery, who acted as regent to Emperor Dom Pedro II, who was in Europe.

The succinctness of the law was intended to make clear that there were no conditions of any kind to the freeing of all slaves. However, it did not provide any support to either freed slaves or their former owners to adjust their lives to their new status: slave owners did not receive any state indemnification, and slaves did not receive any kind of compensation from owners or assistance from the state.

Before the abolition of slavery, slaves were prohibited from owning assets or receiving an education; but after being freed, former slaves were left to make their own way in the world. Without education or political representation, slaves struggled to gain economic and social status in Brazilian society.