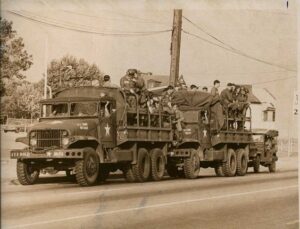 The 1970 Augusta riot was an episode of civil unrest that occurred inAugusta, Georgia between May 11 and May 13, 1970. The three-day riot was sparked by the suspicious death of a young black inmate and would leave half a dozen dead.

African Americans began vandalizing, looting, and burning Augusta. Several were shot when they attempted to cross 15th Street, into more affluent areas, to loot and burn. Witnesses say that many of the African Americans had said that they wanted to kill white people and take their belongings.

On May 9, 1970, Prisoner Charles Oatman was found brutally beaten to death in his jail cell. Police stated that Oatman had died after falling from out of his bunk, but rumors swirled that the 16-year-old had actually been beaten to death by officers. As news of Oatman’s death spread across the black community, numerous demonstrations began to erupt.

A crowd of 200 began to protest in front of the Richmond County Jail on May 10. From the courthouse, the crowd got larger, and the group went on a three-day spree of arson, looting, and carnage.

After a day of demonstrations, black residents began to riot along Ninth Street after a rock was thrown at a bus. Hundreds of angry blacks looted businesses and viciously attacked whites in the area before eventually making their way Downtown, where they continued to vandalize and ransack non-black owned businesses. By the evening, arson teams began torching buildings across the city, and numerous fires dotted the skyline.

Between the evening of May 11 and the morning of May 12, 150 state troopers would arrive in the city with Governor Lester Maddox sending in 2,000 troops of the Georgia National Guard to help the 130-man police force suppress the riots.

As the rioting began to simmer down, singer James Brown entered the city to ease racial tensions, but anger was still very evident in the black community.

When the city had calmed down on May 13, six black men were dead, shot by police, and over 60 people had been injured. Also, 20 downtown buildings had been destroyed, and there had been $1 million in damages.

It was later found out that Oatman had been killed at the hands of two fellow inmates, who were convicted of the murder.