Trending
You are at:Home»365 DAYS-OF-HISTORY»May 10 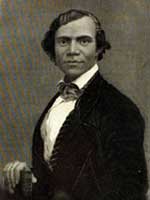 Henry Walton Bibb (May 10, 1815 in Cantalonia, Kentucky – 1854) was an American author and abolitionist who was born a slave. After escaping from slavery to Canada, he founded an abolitionist newspaper, The Voice of the Fugitive. He returned to the US and lectured against slavery. Bibb was born to an enslaved woman, Milldred Jackson, on a Cantalonia, Kentucky, plantation on May 10, 1815. His people told him his white father was James Bibb, a Kentucky state senator, but Henry never knew him. As he was growing up, Bibb saw each of his six younger siblings, all boys, sold away to other slaveholders.

In 1833, Bibb married mulatto slave, Malinda, who lived in Oldham County, Kentucky. They had a daughter, Mary Frances. In 1842, he managed to flee to Detroit, from where he hoped to gain the freedom of his wife and daughter. After finding out that Malinda had been sold as a mistress to a white planter, Bibb focused on his career as an abolitionist. He traveled and lectured throughout the United States.

In 1849-50 he published his autobiography Narrative of the Life and Adventures of Henry Bibb, An American Slave, Written by Himself, which became one of the best known slave narratives of the antebellum years. The passage of the Fugitive Slave Act of 1850 increased the danger to Bibb and his second wife Mary E. Miles, of Boston. It required Northerners to cooperate in the capture of escaped slaves. To ensure their safety, the Bibbs migrated to Canada and settled in Sandwich, Upper Canada now Windsor, Ontario.

In 1851, he set up the first black newspaper in Canada, The Voice of the Fugitive. The paper helped develop a more sympathetic climate for blacks in Canada as well as helped new arrivals to adjust. Due to his fame as an author, Bibb was reunited with three of his brothers, who separately had also escaped from slavery to Canada. In 1852 he published their accounts in his newspaper.