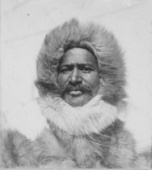 Arctic ExplorerMatthew Henson belongs to that hardy race of adventurers which from man’s earliest history paved the way for civilization by adding to it knowledge that was hitherto unattainable. Henson’s feat in reaching the North Pole holds a high place in the saga of these adventurers. He played a leading part in accomplishing what some of the finest and bravest men had been striving for more than 2,000 years. Henson was born of poor parents in Charles County, Maryland. As a lad, he showed the stuff of which he was made by shipping as a cabin boy on a ship bound for China. On the next voyage, however, he sailed as an able seaman, a grade usually reached only after four year’s apprentice. At twenty-one he attracted the attention of Robert E. Peary, then a naval lieutenant, who engaged him as his personal attendant. In 1891, when Peary started on his polar explorations, Henson went with him and had his first taste of the ice. It was not however, until eighteen years later that the Pole was to be reached. At last, on April 6, 1909, the party made camp. All felt sure from the distance they had covered that they had reached the Pole. Peary completely worn out, went to sleep. Henson walked around outside to look things over. Later, when measurements were taken, it was discovered that Henson, during his walk had been the first mortal to walk on the top of the world. “As I stood at the top of the world,” says Henson, and “thought of the hundreds of men who had lost their lives in the effort to reach it, I felt profoundly grateful that I, as the personal attendant of the commander, had the honor of representing my race in the historic achievement.”