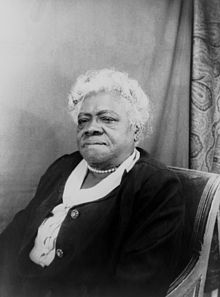 Born on July 10, 1875 in Mayesville, South Carolina, Mary McLeod Bethune ranks high among great women in America. The last of seventeen children of sharecroppers, Mary Bethune lifted herself from the cotton field to the White House as an advisor to the President of the United States. Her greatest accomplishment, however, was almost single-handedly building Bethune-Cookman College in 1923. With only one dollar and fifty cents, nerve and determination, she set out to build a school for the Blacks who were working in the railroad labor camps in Florida. Slowly the school emerged from old crate boxes and odd rooms of old houses near the Daytona Beach City Dump. Bethune served as the school’s president until 1942. Today Bethune-Cookman graduates thousands. In 1935, she received the NAACP Springarn Medal as a symbol of distinguished achievement. Also in 1935, President Roosevelt appointed her national director of the National Youth Administration’s Division of Negro Affairs. She died on May 18, 1955 in Daytona Beach, Florida.