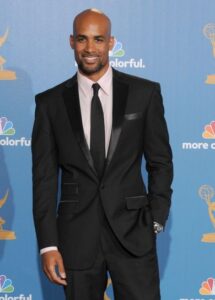 Boris Frederic Cecil Tay-Natey Ofuatey-Kodjo, better recognized as Boris Kodje, is an Austrian-born actor of German and Ghanaian descent who had roles as Kelby in the 2002 film Brown Sugar, the sports-courier agent Damon Carter on the Showtime drama series Soul Food and was a recurring role on Fox’s The Last Man on Earth. Currently he co-stars on BET’s Real Husbands of Hollywood and on the CBS medical drama Code Black.

Kodjoe was born March 8, 1973 in Vienna, Austria, his mother a German Psychologist of Jewish descent and his father a Ghanaian physician who is of the Krobo people. He grew up in the vicinity of Freiburg im Breisgau. He is fluent in German, English and French and speaks some Spanish.

In 1995, Kodjoe was featured in TLC’s music video for Red Light Special and in 2002 he was named on of the “50 Most Beautiful People in the World” by People Magazine. He is often recognized as one of the seven regulars cast members from the Showtime drama Soul Food, which aired from 2000 to 2004.

He appeared in the 2002 film Brown Sugar and starred in the short-lived sitcom Second Time Around with his Soul Food co-star Nicole Ari Parker, whom he eventually married. He played the role of David Taylor, the wayward son of Pastor Fred Taylor, in the October 2005 film The Gospel. He performed in a play called Whatever She Wants, starring Vivica A. Fox, and made an appearance on the fifth season of Nip/Tuck.

His recent role was in the 2009 science fiction film Surrogates. On December 16, 2009, it was announced that Kodjoe had been cast as the male lead, Steven Bloom, in the new J. J. Abrams television series Undercovers; the show premiered in September and was subsequently cancelled in November 2010 on NBC. Also that year, he appeared as Luther in the film Resident Evil: Afterlife. He appeared on Franklin & Bash in 2010.

In 2013 kodjoe began starring in the BET comedy parody series Real Husbands of Hollywood. In 2014 he was cast as regular on the ABC primetime soap opera Members Only created by Susannah Grant. In 2015, Kodjoe began a recurring guest-star role in Fox’s The Last Man on Earth television series.

Kodjoe married Nicole Ari Parker his Soul Food: The Series co-star in May 2005 in Gundelfingen, Germany. Their first child, a girl was born in March 2005 and their second child, a boy, was born October 2006. They resides in California.