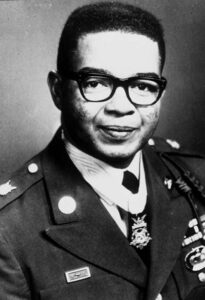 President Lyndon B. Johnson presented the Medal of Honor, America’s highest military decoration, to Lawrence Joel. Joel was the first living African American to receive the medal since the Spanish-American War. Joel was born February 22, 1928 in Winston-Salem, North Carolina.

He joined the United States Army in 1946 and served in the Korean and Vietnam Wars. On November 8, 1965, while serving as a medic with the rank of specialist five assigned to the 1st Battalion of the 503rd Infantry Regiment of the 173rd Airborne Brigade, Joel’s actions earned him the medal. On that date, Joel and his battalion found themselves in a Viet Cong ambush, outnumbered six to one. Under heavy gunfire, Joel did his duty as a medic, administering first aid to wounded soldiers.

Joel defied orders to stay to the ground and risked his life to help the many wounded soldiers, nearly every soldier in the lead squad was either wounded or killed. Even after being shot twice, Joel continued to do his job. He bandaged his wounds and continued to help the wounded in not only his unit, but in the nearby company as well.

When his medical supplies were depleted, he hobbled around the battlefield for more, using a makeshift crutch. Joel attended to 13 troops and saved the life of one soldier who suffered from a severe chest wound by improvising and placing a plastic bag over the soldier’s chest in order to seal the wound until supplies were refreshed. Joel retired from military service in 1973 and died February 4, 1984.

The Lawrence Joel Veterans Memorial Coliseum in Winston-Salem, the Joel Auditorium at Walter Reed Army Medical Center, and the U.S. Army clinics at Fort McPherson and Fort Bragg are all named in his honor.