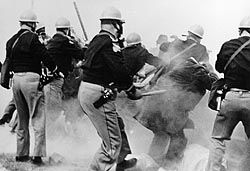 The first Selma to Montgomery march, led by John Lewis of the Student Nonviolent Coordinating Committee (SNCC) and the Reverend Hosea Williams of the Southern Christian Leadership Conference (SCLC), with approximately 600 marchers was attacked by state and local police with billy clubs and tear gas at the Edmund Pettus Bridge.

The televised images of the “Bloody Sunday” attack galvanized support for the Civil Rights Movement and on March 24 approximately 8,000 marchers successfully completed the 54 mile march to Montgomery, protected by 2,000 soldiers of the United States Army and 1,900 members of the Alabama National Guard under federal command.

In 1996, the Selma to Montgomery Voting Rights Trail, a U.S. National Historic Trail, was created by Congress as an original route of national significance in American history.