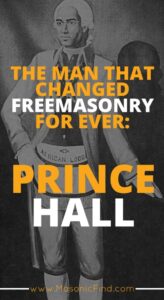 On March 6, 1775, in a Lodge of Freemasons at Castle William, Boston Harbor, (later called Fort Independence) Prince Hall and fourteen others were initiated by the Master of Lodge No. 441: a traveling military Lodge of Irish Registry attached to the 38th Foot (Regiment) under the command of General Gage. The Master of Lodge No. 441 was Sergeant (or Sergeant-Major) John B. Batt.

Barbadian-born Prince Hall spent the first thirty five years of his life enslaved. Twenty one of those years he was owned by William Hall who brought him to Boston in 1765. Prince Hall was finally manumitted in 1770. He quickly became a leader of the small African American community in the Boston area, a position that was enhanced by his fighting with the patriots at the Battle of Bunker Hill in 1775. However Hall is most well known as the founder of the black Masonic Lodge in the United States.

On March 6, 1775, Hall and fourteen other free blacks were inducted into the order of Free and Accepted Masons by British soldiers stationed near Boston. With the departure of the British less than two weeks later, Hall and the other black members were permitted to continue meeting and on July 3, 1775, formed the provisional African Lodge No. 1, the first black Masonic lodge in the United States.

After the Revolution Hall as grand master of the lodge petitioned for and received a permanent charter, authorized in April 1787. Hall became master of the new branch. Hall also became a Methodist minister in Cambridge. On June 25, 1792, Hall delivered the speech reprinted below at a Charles Town meeting hall, where he sets out the principles that would guide the black Masons for the next two centuries.