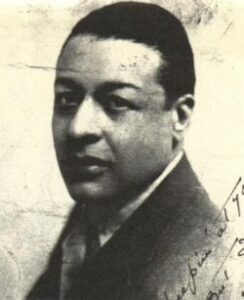 Egbert Austin “Bert” Williams, the pre-eminent black entertainer of his era, died. Williams was born November 12, 1875 in Nassau, Bahamas. He moved to San Francisco, California to study civil engineering, but instead joined a minstrel show. In 1893, he formed the team of Williams and Walker with his partner George Walker and they performed song and dance numbers, comic dialogues, and skits.

In 1896, they headlined the Koster and Bial’s vaudeville house for 36 weeks and popularized the cakewalk dance. Williams and Walker appeared in a succession of hit shows, including “Sons of Ham” (1900), “In Dahomey” (1902), which in 1903 became the first black musical to open on Broadway, and “Abyssinia” (1906). Williams composed and recorded many songs, including “Nobody” which sold between 100,000 and 150,000 copies, a phenomenal total for the era.

In 1909, Walker was forced to leave their partnership due to ill health and in 1910 Williams joined the Ziegfeld Follies as the featured performer amid an otherwise all-white show. By 1920, when 10,000 sales was considered a successful release, Williams had four songs that shipped between 180,000 and 250,000 copies and he was one of the three most highly paid recording artists in the world. On November 18, 1944, the U.S. liberty ship SS Bert Williams was launched in his honor and in 1996 he was posthumously inducted into the International Clown Hall of Fame.

The many books about Williams include “Nobody: The Story of Bert Williams” (1970), “The Last Darky: Bert Williams, Black-on-Black Minstrelsy, and the African Diaspora” (2005), and “Introducing Bert Williams: Burnt Cork, Broadway, and the Story of America’s First Black Star” (2008). Williams’ name is enshrined in the Ring of Genealogy at the Charles H. Wright Museum of African American History in Detroit, Michigan.