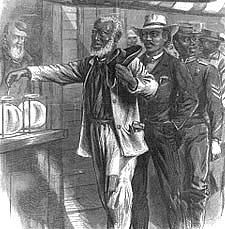 Thomas Mundy Peterson of Perth Amboy, New Jersey cast the first vote by an African American after the passage of the 15th Amendment to the United States Constitution.

By this date, he was serving as a school custodian and general handyman in Perth Amboy. He later became the town’s first African American to hold elected office and also the first to serve on a jury.

Peterson died February 4, 1904 and later the school where he worked was renamed in his honor. In New Jersey, March 31 is annually celebrated as Thomas Mundy Peterson Day in recognition of his historic vote.