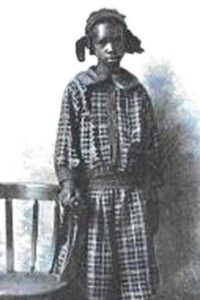 Sarah Rector (March 3, 1902 – July 22, 1967) was an African American member of the Muscogee (Creek) Nation, and became known as being the “Richest Colored Girl in the world” or the “Millionaire girl a member of the race.”

Sarah Rector was born in 1902 near the all-black town of Taft, located in the eastern portion of Oklahoma, in what was then Indian Territory. She had five siblings. Her parents, Joseph Rector and his wife, Rose McQueen (both born 1881) were African descendants of the Creek Nation Creek Indians before the Civil war and which became part of the Creek Nation; The Treaty of 1866.

As such, they and their descendants were listed as freedmen on the Dawes Rolls, by which they were entitled to land allotments under the Treaty of 1866 made by the United States with the Five Civilized Tribes. Consequently, nearly 600 black children, or Creek Freedmen minors as they were called, were granted 160 acres of land each. This was a mandatory step in the process of integration of the Indian Territory with Oklahoma Territory to form what is now the State of Oklahoma.

The parcel allotted to Sarah Rector was located in Glenpool, 60 miles from where she and her family lived. It was considered inferior infertile soil, not suitable for farming, with better land being reserved for white settlers and members of the tribe.

The family lived simply but not in poverty; however, the $30 annual property tax on Sarah’s parcel was such a burden that her father petitioned the Muskogee County Court to sell the land. His petition was denied because of certain restrictions placed on the land, so he was required to continue paying the taxes.

To help cover this expense, in February 1911, Joseph Rector leased Sarah’s parcel to the Standard Oil Company. In 1913, the independent oil driller B.B. Jones drilled a well on the property which produced a “gusher” that began to bring in 2,500 barrels of oil a day. Rector began to receive a daily income of $300 from this strike.

The law at the time required full-blooded Indians, black adults and children who were citizens of Indian Territory with significant property and money, to be assigned “well-respected” white guardians. Thus, as soon as Rector began to receive this windfall, there was pressure to change Rector’s guardianship from her parents to a local white resident named T.J. (or J.T.), Porter an individual known to the family. Multiple new wells on the site were also productive, and Rector’s allotment subsequently became part of the famed Cushing-Drumright Oil Field. In October 1913, Rector received royalties of $11,567.

As news of Rector’s wealth spread worldwide, she began to receive numerous requests for loans, money gifts, and even marriage proposals from four young men in Germany—despite the fact that she was only 12 years old. Given her wealth, the Oklahoma Legislature declared her to be a white person, so that she would be allowed to travel in first-class accommodations on the railroad, as befitted her position.

Rector was already a millionaire by the time she had turned 18. She owned stocks and bonds, a boarding house, a bakery and restaurant in Muskogee, Oklahoma, as well as 2,000 acres of prime river bottomland. At that point, she left Tuskegee and, with her entire family, moved to Kansas City, Missouri. She purchased a house on 12th Street, that is still there and known as the Rector House. She soon married a local man, Kenneth Campbell. The wedding was a very private affair, with only her mother and the bridegroom’s paternal grandmother present. The couple had three sons before they divorced in 1930.

Rector lived a comfortable life, enjoying her wealth. She had a taste for fine clothing and fast cars. She was frequently ticketed by the police of the city for speeding. She hosted frequent gatherings at her home for the leading members of the nation’s African American community, but also was later remembered for sending her chauffeur to drive the children of the neighborhood to school. Her husband partnered in 1928 with the auto dealer Homer Roberts and moved to Chicago to open Roberts-Campbell Motors, the second African American owned auto dealership. New car sales faltered with the onset of the depression and the venture soon closed.

They divorced in 1930, and in 1934 she married William Crawford. They owned a restaurant where they entertained the likes of Count Basie and Duke Ellington. In the depression she lost the majority of her wealth as did many wealthy Americans.

Rector died on July 22, 1967, at the age of 65. Her remains were buried in the city cemetery of her hometown of Taft.