Trending
You are at:Home»365 DAYS-OF-HISTORY»March 26 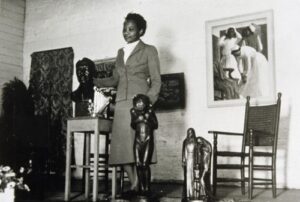 March 26, 1962 Augusta Fells Savage, Harlem Renaissance sculptor, died. Savage was born February 29, 1892 in Green Cove Springs, Florida. In 1921, she was admitted to Cooper Union Art School in New York City. In 1923, she applied for an art program sponsored by the French government, but was turned down by the international judging committee because of her race. During this time, she received her first commission, a bust of W.E.B. Du Bois for the Harlem Library. In 1929, Savage enrolled in the Académie de la Grande Chaumière, a leading Paris art school. Savage returned to the United States in 1931 and in 1934 became the first African American artist to be elected to the National Association of Women Painters and Sculptors. That year, she also launched the Savage Studio of Arts and Crafts which evolved into the Harlem Community Art Center. In 1939, Savage received a commission from the New York World’s Fair to create “Lift Every Voice and Sing,” a 16 foot sculpture that was the most popular work at the fair. One of her most famous busts, “Gamin,” is on permanent display at the Smithsonian American Art Museum. A biography intended for young readers, “In Her Hands: The Story of Sculptor Augusta Savage,” was published in 2009.