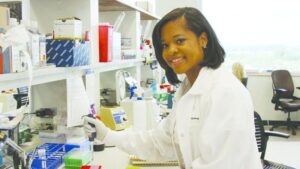 Dr. Joy McDaniel has pioneered research leading to a breakthrough in triple negative breast cancer, one of the most aggressive forms of the cancer, leading her to receive a postdoctoral fellowship at the prestigious University of Texas MD Anderson Cancer Center.

While McDaniel was studying for her PhD, her best friend died of breast cancer at age 24, which definitely motivated her and made her research “personal.”

Specifically, McDaniel was looking at what is called triple negative breast cancer, which is so named because is does not have the three most common receptors for treatment drugs. What’s more, it’s the form of cancer most likely to kill African-American women. “One out of every three breast cancer diagnoses in African American women is triple negative,” McDaniel told AL.com.

McDaniel and her team looked into the protein switches that are active in this form of cancer in order to look at the cellular reproduction that can cause metastasis, when cancer migrates to other parts of the body and creates tumors.

“We were able to identify the same binding pattern in actual triple negative breast cancer patients,” McDaniel said. “This was very important because, by identifying where the binding occurs, we have a framework for what genes are being turned on or off by STAT3. That was the first sign we may have identified something that may be important.”

This gives them a starting point for how to prevent metastasis, meaning a disease that currently has no targeted therapies could soon have some.
“What we found was that therapies that target STAT3 could prevent metastasis in triple negative breast cancer,” McDaniel said.
McDaniel is an alumna of Spelman College and the University of Alabama in Huntsville.