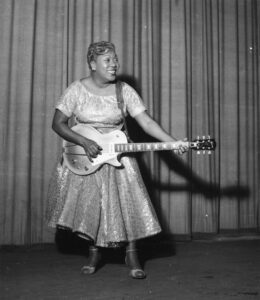 Sister Rosetta Tharpe (March 20, 1915 – October 9, 1973) was an American singer, songwriter, guitarist and recording artist. A pioneer of mid-20th-century music, she attained popularity in the 1930s and 1940s with her gospel recordings, characterized by a unique mixture of spiritual lyrics and rhythmic accompaniment that was a precursor of rock and roll.

She was the first great recording star of gospel music and among the first gospel musicians to appeal to rhythm-and-blues and rock-and-roll audiences, later being referred to as “the original soul sister” and “the godmother of rock and roll”. She influenced early rock-and-roll musicians, including Little Richard, Johnny Cash, Chuck Berry, Elvis Presley and Jerry Lee Lewis.

Willing to cross the line between sacred and secular by performing her music of “light” in the “darkness” of nightclubs and concert halls with big bands behind her, Tharpe pushed spiritual music into the mainstream and helped pioneer the rise of pop-gospel, beginning with her 1939 hit “This Train”. Her unique music left a lasting mark on more conventional gospel artists, such as Ira Tucker, Sr., of the Dixie Hummingbirds. While she offended some conservative churchgoers with her forays into the pop world, she never left gospel music.

Tharpe’s 1944 hit “Down by the Riverside” was selected for the National Recording Registry of the U.S. Library of Congress in 2004, which noted that it “captures her spirited guitar playing and unique vocal style, demonstrating clearly her influence on early rhythm-and-blues performers” and cited her influence on “many gospel, jazz, and rock artists”. (“Down by the Riverside” was recorded by Tharpe on December 2, 1948, in New York City, and issued as Decca single 48106.)

Her 1945 hit “Strange Things Happening Every Day”, recorded in late 1944, featured Tharpe’s vocals and electric guitar, with Sammy Price (piano), bass and drums. It was the first gospel record to cross over, hitting no. 2 on the Billboard “race records” chart, the term then used for what later became the R&B chart, in April 1945. The recording has been cited as precursor of rock and roll.

Most sources state that she was born Rosetta Nubin in Cotton Plant, Arkansas, to Katie Bell Nubin and Willis Atkins, who were cotton pickers. However, researchers Bob Eagle and Eric LeBlanc give her birth name as Rosether Atkins (or Atkinson), her mother’s name being Katie Harper. Little is known of her father, except that he was a singer.

Tharpe’s mother Katie was also a singer and a mandolin player, evangelist, and preacher for the Church of God in Christ (COGIC), which was founded in 1894 by Charles Harrison Mason, a black Baptist bishop, who encouraged rhythmic musical expression, dancing in praise and allowing women to preach in church. Encouraged by her mother, Tharpe began singing and playing the guitar as Little Rosetta Nubin at the age of four and was cited as a musical prodigy.

By age six, Tharpe had joined her mother as a regular performer in a traveling evangelical troupe. Billed as a “singing and guitar playing miracle,” she accompanied her mother in performances that were part sermon and part gospel concert before audiences across the American South.

In the mid-1920s, Tharpe and her mother settled in Chicago, Illinois, where they performed religious concerts at the COGIC church on 40th Street, occasionally traveling to perform at church conventions throughout the country. Tharpe developed considerable fame as a musical prodigy, standing out in an era when prominent black female guitarists were rare.

In 1934, at age 19, she married Thomas Thorpe, a COGIC preacher, who accompanied her and her mother on many of their tours. The marriage lasted only a few years, but she decided to adopt a version of her husband’s surname as her stage name, Sister Rosetta Tharpe.

In 1938, she left her husband and moved with her mother to New York City. Although she married several times, she performed as Rosetta Tharpe for the rest of her life.