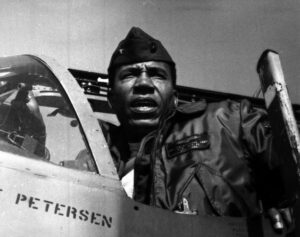 Petersen served combat tours in the Korean and Vietnam Wars, flying over 350 combat missions with over 4,000 hours in various flight attack aircraft. He was the first African American to command a fighter squadron, a fighter air group, an air wing, and a major base. He earned his Bachelor of Arts degree and Master of Arts degree in international affairs from George Washington University in 1967 and 1973, respectively.

In 1979, he was promoted to brigadier general, in 1983 to major general, and in 1986 to lieutenant general. Petersen retired from the Marine Corps in 1988. He then managed the corporate aviation fleet for DuPont DeNemours until retiring in 1997. Petersen published his autobiography, “Into the Tiger’s Jaws: America’s First Black Marine Aviator,” in 1998.

The contract for the ship, along with the name, was first announced in a press release from Huntington Ingalls Industries on 30 March 2016.